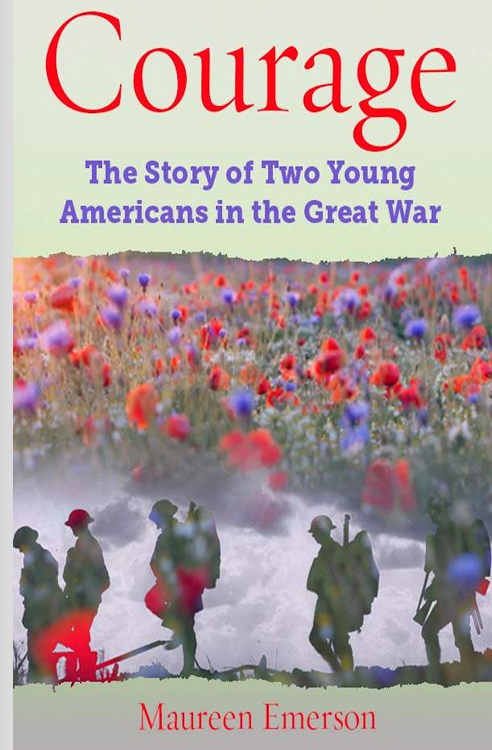 Click here to purchase from Amazon UK – Kindle edition only available at £2.18

‘Courage’ is Maureen’s small tribute to the bravery of those young people who felt it was their duty to go independently to the Great War. It is the true story of two of these, Dillwyn and Elisabeth Parrish Starr, a brother and sister from Philadelphia who left for France in 1914 and 1916 respectively. The United States did not enter the war until 1917, then virtually saving the day, but many Americans of all ages poured large amounts of money, aid and themselves into the conflict from as early as 1914. Dillwyn and Elisabeth went for different reasons, one to fight with the British Army on the Somme and the other to engage in dangerous aid work on the Western Front. The outcome for each was very different.

The story follows the progress, through the early part of the 20th century, of the respected Starr family of Rittenhouse Square in Philadelphia. The family had an esteemed position in the town, but nevertheless two of their three children would leave home and eventually never see their parents again. The exception was Dillwyn Starr, the middle child and the love of his parents’ life. Dillwyn would leave for France almost as soon as war was declared and, after many adventures, eventually become a young officer in the British Coldstream Guards.

Elisabeth Starr sailed to France to nurse with Mrs William K. Vanderbilt at the American Ambulance Hospital in Paris before throwing herself into dangerous and exhausting work on the Somme battlefields.

There was a third child, the eldest sibling. Louis Starr Jr joined the conflict in 1917 and became a balloon observer sailing over the front lines tracking enemy movements during almost all the battles in which American troops became involved. Beset with problems at home, his bravery was unsung. All were truly brave.

Courage is based on a chapter in Maureen’s book Escape to Provence
© Copyright: Maureen Emerson 2019